Carlos is a Man! One and only man who never walks alone and he knows it. He`s backstreet gunfighter, highwayman, evil and danger road gangster but only one shot is enough to stop him. Temporarily! Carlos and his magic poncho are sad but true legend from Mexico!

Good cowboy from Texas. Ex lawman, blacksmith, horseman, rancher and trapper. His ''golden'' shot stop Carlos every time and again and again. His father was migrant from Scotland to Wild West where he met some fat red skin woman, Jerry's mother, who raped him. Jerry Jehrn is famous as ''The Man who shot His Horse''.

Old Jerry's frend and comrade. When they play only one game of chess or poker, Jerry wins twice. His secret weapon are his sexy mustaches. Mr Poncho was the first gay from Wild West. 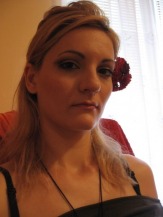 Jerry Jehrn`s son. Cute, clever and danger kid. Compared to him, Billy the Kid is average peace of cake.

Little mexican boy who wanders around looking for peso.